After 20 years teaching computers, media production, language arts and social studies at Price Middle School, Rick is thrilled be part of the 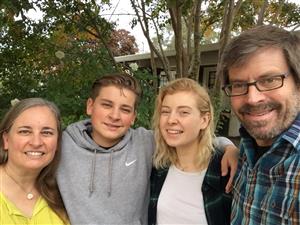 creative team starting Steindorf STEAM School.  Rick attended Cal Poly, San Luis Obispo for his degree and teaching credential and has been a “maker” his whole life.  After attending his first Maker Faire in 2007, Rick found his people - basement inventors and garage tinkerers!  Soon after, his first article for Make: Magazine was published and since then he’s published dozens of articles, a book and presented at Maker Faires in the Bay Area, New York City and Detroit.  In 2012, Rick kicked off Maker Camp at the New York Hall of Science on Google’s brand new (at the time) Google Plus platform.  While his tinkering interests are broad, he especially loves all things that fly like rockets and drone aircraft.

Rick coordinated Make’s Young Makers programs in the South Bay and loves bringing the maker spirit to kids.  He helped prototype The Tech Museum’s Just Wing It! exhibit last year and is known around The Tech simply as “Maker Rick”.  He’s excited that his life as a teacher has collided with his love for making in his new position at Steindorf.  Along with his wife and daughter Kelly (19) at UC Davis and son Micah (16) at San Jose City College, he enjoys backpacking, reading good books, NPR and traveling to exciting corners of the world like Turkey, Morocco, Vietnam, Albania and Honduras.